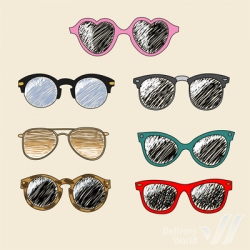 Nobody knows when the first glasses appeared. It is only known that in a time when glass processing skills improved, the people noticed that properly processed thick pieces of glass have magnifying properties, yet it happened much before invention of the glasses. It is known that Neron used specially processed emerald for reading, and Seneca used glasses filled with water. 2,000 years ago sunglasses were used by the Escimo for hunting, and were made of wood or bone, with small narrow cuts for eyes.

In the 12th century Chinese judges had to wear a kind of sunglasses: - plates made of smokestone, to hide their emotions. Hundred years later the glasses appeared in Italy, and can be found on the paintings by the European artists of the 14-15 centuries; Leonardo da Vinci invented the first contact lenses.

In the 17th century the glasses showed status of its owner in Spain – the bigger the frame, the higher it was; the lenses could reach a size of a palm, and the different color glasses were meant to show noble origin.

In 1950s Soviet soldiers were surprised when saw the Chinese militants wearing dark glasses during daytime training – the glasses were used to see their abilities to conduct campaign at night, so that the army chiefs could see all the omissions.

Danish farmers put plastic glasses on cocks, making them short-sighted and unable to fight others.

Often sunglasses are considered as fashion accessories, yet, nowadays real sunglasses bear much more important function; they protect the eyes of the owner from harmful UV. That’swhyithastobecarefullychosen.

In the beginning of April international freight forwarding company Delivery World shipped quality stylish and fashionable sunglasses from Tokyo (Japan) . Fragile cargo crossed thousands of kilometers safely. Soon the glasses shipped by Delivery World will be available for sale in the boutiques and optics shops of .