Registration
Home » About Us » News » Catch the Wave: Delivering Radar Detectors from Shenzhen

Radar detectors are compact electronic devices that detect and inform the user on availability of radars in its field; this devices are set to detect radio waves and laser rays transmitted by radars.

One of the main parameters to consider when choosing radar detection device is its delicacy and ability to exclude false signals. This are the main differences between radar detectors of different price categories.

Usage of antiradar and radar detectors is governed by law; for instance Finland banned such devices, and empty holder outside the front glass or inside the car will attract serious attention of the Finnish border guards. Some European states provide punishment not only for usage, but for purchase, and even for offer for purchasing such devices. Therefore it is important to make sure that the laws of your state allow usage of such devices which is absolutely legal on the territories of the n Federation, Ukraine and Belo.

In the middle of this month Delivery World performed the request for delivery of the lot of radar detection devices from Shenzhen. Entry models made in China perfectly cope with the set tasks, and are of great demand in . Quality, design, ease of usage, and working range are rather high. Some models were developed specifically for , with consideration of specifics of the used traffic radars. Usage of this devices will help many to save on road fines for exceeding speed. So catch the wave, and do not overdrive! 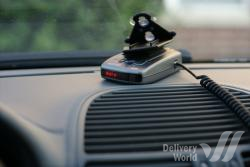