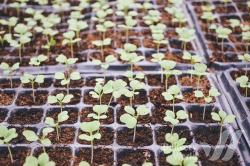 From his four expeditions to American shores Columbus brought to Spain dozens of plants and animals that were not known by Europeans. It took years of precise examination and selection to introduce this products in to the European menu, and several centuries to make them common for remote locations in Europe and other continents. Pineapple, sunflower, pumpkin, avocado, zucchini, potatoes, corn, and tomatoes are just few of our favorite foods delivered to us by this great discoverer.

Potatoes brought by Columbus were nothing alike the vegetable we are used too. It had small watery clods, and was taken for decorative plant. First people tried to eat it raw, and used green clods for food, so that the vegetable was declared poisonous. Only in the mid of the 18th century due to the French agriculture's effort potatoes were declared non-poisonous, and full of nutritious properties. Several centuries later, Europe came to know of "ground apples", and during the ruling of Peter the First it was brought . Nevertheless, ns refused to eat and to grow this vegetable, believing it caused awful diseases, including Tuberculosis. Couple of centuries later potatoes became second bread for ns; USSR produced nearly third of world potatoes production.

Just like potatoes tomatoes were believed to be poisonous and decorative plants; Europeans were afraid to eat colorful red berries. Karl Linney in his plants classification called it "solanum likopersikum" which translates from Latin as "wolf's peach". Tomatoes were found on Aztecs' motherland, where it was called "tumantla" ("big berry"), Italians called it "pomidoro" ("golden apple"), and French – "pomme d'amour" ("apple of love"). Tomatoes came during the ruling of Katherine the II, and only in 1850 were proved to be eatable and useful. From that time tomatoes were planted in the Southern regions of , and scientists started work on selection of plants that could be grown in the Northern part of .

Corn (or mays as it was called by the Native Americans) was one of the first vegetables that were brought by Columbus from the New World. Corn spread across Europe very fast, and its nutrition properties were highly appreciated. High produce and easy growth conditions of corn made it really valuable to agriculture especially compared to rice and wheat. Corn came in the 17th century, and from the 19th century it started to grow on the n fields.

In the beginning of May Delivery World on request of its regular customer delivered lot of the plants seeds from Los Angeles to Krasnodar. Customs procedures are completed, and the first crops start to appear in Krasnodar.