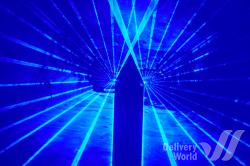 Modern laser show is made using projection systems to create static or dynamic graphic images on the screen usually accompanied and synchronized with music. The image can be localized on any light diffusing surface, such as walls, landscape, reflecting or semi-transparent screen.

Laser shows are considered to be separate type of modern art, yet more often it is separate part of the performance, presentation, or concert.

Concert or theater performances sometimes use laser effects as part of the light decoration. Usuallythey are laser compositions, images, rays in the lightly smoked stage surface creating waves, tunnels, and many other volumetric compositions according to the capacities of the scanning units of the projection system. World-wide known examples of such laser application are laser stage imaging used on the Pink Floyd concerts in 1980s, Didier Marunani and Space from 1970s till today.

The first laser effect demonstration systems were made using miracles. The ray was scanned in the surface by motorized rotating mirrors. Switching of the rays with the help of electromagnetic shutters equipped with the mirrors created surface shooting effect. Various laboratory optical equipment was used together with the mirrors: such as diffraction net and prisms. For a long time these systems were remained most common and were cold "laser table" or "laser bench", and were both industrial and hand-made. They have not been changed till today, and started to be replaced only with development of mirror X-Y scanners with galvanometric hanger. The first scanners were used to create abstract lissajous images and shapes. One of the first examples of using intellectual laser projection development became development of the laser system for projection of large-scaled images. Authors of this development are the artist Lowel Cross and the physicianCarson Jeffries. With their help David Tudor has made first electronic music performance with projected laser images in Californian Mills College in 1969.

Modern scanners with their projective capacity, high speed, wide angle range (up to 80°) compile the heart of the modern projection laser systems. They help creating graphic vector and pixel images defining the meaning of "laser graphic and animation" .

Laser show is exciting and original sight that will make any party special. This month Delivery Worldperformed the request for airfreight delivery of professional laser and light equipment from Toronto to Helsinki, once again proving its reliability and expertise of international airfreight forwarder.