Registration
Home » About Us » News » The Key to the Global Industrial Market: Delivery World on HANNOVER MESSE 2016

The Key to the Global Industrial Market: Delivery World on HANNOVER MESSE 2016 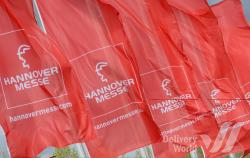 25 to 29 April Hannover Fairground hosted the world's largest industrial show HANNOVER MESSE 2016 gathered over 5,200 exhibitors and over 190,000 of visitors from all over the world. The event first held in 1947 till date keeps growing and developing.

According to the show's web-site, quoting Dr. Jochen Köckler, member of the Managing Board at Deutsche Messe"This is where the latest technologies and innovations are unveiled to a wide audience. Industry initiatives from Germany, the USA, China, Japan and the EU have come together here in Hannover to embark on a shared journey into the digital future."

Indeed, no other exhibition in the world can attract not only attention of so many industry experts, but of the top governmental officials as well. U.S. President Obama had three ministers in his delegation, including Secretary of Commerce Penny Pritzker, who stayed at the fair until Wednesday night to conduct meetings. Five of the most important EU Commissioners were at this year’s HANNOVER MESSE: Vice-President Maros Sefcovic (Energy), Günther Oettinger (Digital), Elzbieta Bienkowska (Industry), Cecilia Malmström (Trade) and Carlos Moedas (Research). In the words of Commissioner Oettinger: "Apart from being the world’s leading industrial trade fair, HANNOVER MESSE has now taken on the role of pioneer in the digitalization of industry. For the European Commission, it has become a key platform for the sharing of information and ideas, and as a place for debating the future of European industry."

Representatives of Delivery World were among the visitors of the show. The quality service offered leading n international air freight forwarding company as usual attracted great interest of the participants of the show. Delivery World's experts, took part in multiple events held within the framework of HANNOVER MESSE, shared their experience of international airfreight of industrial and digital equipment, had pleasant meetings with existing customers of the company, and entered into several new contracts for airfreight of industrial equipment and spare parts from Germany, China, and Hong Kong .