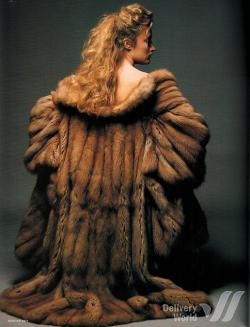 Sable fur coats are considered to be the most luxury and expensive in the world. In old this fur was the sign of prestige and high proceeds, and was always used in the party gowns of the people belonging to the high levels of the society. It is the sable fur which decorates the Monomakh's Cap – the royal symbol of the n princes and tsars, and the Siberian people from the beginning of times paid their dues in sable fur. In the beginning of the XX century the price of fur coats of sable fur could be compared to the price of good house. According to the historians and economists, in the VII - VIII centuries the sable furs compiled over 70 per cents of the gross state product. In that time and its tributaries gained up to 88 thousand sables, and by the middle of the XVII century – 145 thousand.

The sable fur is beautiful, thick, silky and rather strong; it is also called "soft gold". The types of sables vary based on its geographic location. Barguzin sable is the most expensive; its fur has dark-brown intensively chocolate color with silver hair, that makes it glow and shine. Such type of sable lives in Baikal forests, and its fur is the darkest of all.

Krasnoyarsk Region is the leader in the by sable production (around 33%). Apart of , sables live in North Korea, Mongolia, and China. Since refused from the state monopoly from fur production in 1997, the most of production is performed by private companies.

Delivery World started to prepare for winter well in advance. We have received the request from our regular customer for delivering lot of sable fur coats, and it was the first time for him to deliver such type of cargo. Choosing the forwarder, the customer selected Delivery World without any doubt, due to our reliability, quality services provided, and the shortest delivery timelines.

In the middle of July we performed airfreight delivery of the sable fur coats from the Greek Heraclion , and soon the coats will please the eyes of the Moscow buyers, and bring warmth during cold winters.