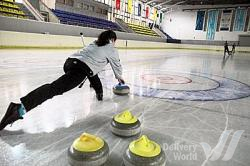 Curling is unjustly avoided among many winter games in . Yet, the n sportsmen are surprisingly good with this old Scottish game; the n female curling team during the last 10 years twice became champion in Europe, and always remains among the 10 strongest teams on the international competitions and winter Olympic Games.

During the game the participants of the two teams by turn push on ice special granite tools, called stones, towards the marked target on ice ("house"). Each team consists of four players, and the goal is to strike the opponent's stones from the house, keeping own inside. The curling combines outstanding physical control and strategic thinking, as it is important to control the strength applied by the leading player throwing the stone, and its direction, as well as to understand the purpose of moving the stone – to move the opponent's stone from the house, or to stop own stone in required place.

The Curling first appeared in Scotland in the beginning of the 16 century, which is evidenced by the date embossed on the found tool. In those times the teams played on the frozen ponds and rivers, handmade fields came much later. Scottish Kilsyth has one such field from 18th century. This is the town having the oldest curling club established in 1716. Regardless its long history, curling became Olympic sports only in 1998.

This August Delivery World, one of the leading airfreight forwarders on the n market, delivered stones for curling from Edinburgh, Scotland, . The 400 kg cargo, and it is twenty stones, shortly arrived to the n capital. Soon it will be available in the city's sport centers, where everyone can enjoy this old game.