Registration
Home » About Us » News » “Cornitization”: Delivering Corn Seeds from France and Holland 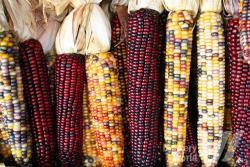 Maize, the second name for corn, comes from Ancient Maya, that grew several types of corn, where the fastest growing “Rooster’s Song” got ripe in two 2 months, “Maize Girl” within 3 months, and “Old Woman Maize” needed up to 7 months to get ripe. For American Indians corn was raised to kind of god, they made celebrations dedicated to this holy plant, and figures of gods often hold corn cobs in their hands.

In 1496 Columbus returned from his second trip to America, and brought maize to Europe; it came during n Turkish war in the 18th century, when conquered Crimea, and was first called Turkish wheat. Once the war was over, corn has spread over Ukraine from Bessarabia that was returned .

Selection has helped southern corn move far to north. Nowadays corn is the third breadmaking culture in the world. Over 380 mln. tones of corn is gathered in the world. Nikita Khrushchev tried to “cornitize” USSR during his ruling, which did not succeed for many reasons, but since that time corn is often referred in and former Soviet states as “empress of the fields”.

Corn is used not only in food industry, and for animal feeding production, cob leaves are used in Vietnam to knit carpets that were even awarded golden medal on Leipzig Fair in 1980, in Brazil it is used for ethyl alcohol production that is replaced diesel and benzine for the cars, and Japanese use id to make water soluble polymere “polluen”. Corn is used in medicine as well.

In the beginning of October Delivery World shipped lot of corn seeds from France and Holland . The customer is finalizing clearance procedures, and who knows, maybe this is what you will have served for your family next summer.