Registration
Home » About Us » News » Delivery World Spicing Up: Chili Seeds from Thailand to Krasnodar

Delivery World Spicing Up: Chili Seeds from Thailand to Krasnodar 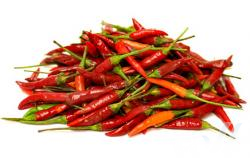 Thai cuisine developed under ages long influence of Indian, Chinese, and European cuisines. Initially it mostly consisted of fish, seafood, and water plants. Chinese and Japanese cuisines have made great changes in Thai nutrition changes, and starting from the 17th century it got greatly influenced by European cuisine. Portuguese missionaries brought Chili peppers to Thailand.

Red hot pepper is fresh or sundried yields of special sorts of semi shrub Capricum anuum. Even though its name sounds similar to the name of the country (Chile), it has nothing to do with it, and its name comes from Aztecan languages ("chilli") and means red. Motherland of this plant is tropical America. Diggings of Peruvian entombments showed that chili peppers were  cultivated there long before Europeans came to America. Spanish and Portuguese that sailed to discover those countries called chili "Indian". Nowadays hot chili peppers are grown by most of the tropical countries, but most of it grows in India and Thailand.

Red chili has strong direct odor and it tastes ranges from spicy to hot, or even very hot. Phenol compound of capsaicin contained in its seeds, skin, and fibers (which is not available in sweet capsicum) gives it those properties. Some kinds of hot red pepper are so spicy, that just one touch is enough to cause irritation. If by chance you had a bite of too hot chili pepper, do not drink water, it will not help. To stop burning you have to drink milk, eat few spoons of yogurt, or to "beat" it with something sour like lime or lemon. Red peppers contain plenty of C and A vitamins, in addition to being great source of B group vitamins, namely of vitamin B6. It is full of calcium, magnum, and ferrum.

Hot peppers are used in medicine as well. Its infusion is used to increase appetite and enhance digestion. Complex pepper liniment and sticky plasters are used as local revulsants. Red pepper is used in:

Shock conditions of all types;

The research published in 2006 showed red pepper is efficient in fighting cancer cells.

In the end of this month Delivery World shipped the lot of chili pepper seeds from Thailand to Krasnodar. Hot Thai pepper is very popular in , probably because of great love of ns to Thai cuisine and resorts. Who knows, maybe soon Krasnodar will not only be famous with its apples, but with chili peppers too