Registration
Home » About Us » News » Flying Carpets: Airfreight of Carpets from Bangkok 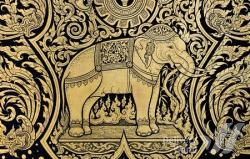 The history of the Kingdom of Siam started in the 13th century. In this time, it was Khmer country that was seized by Thai locals in 1238, and received independence. In the same time Thai version of Buddhism and writing started to form.

In 1438 Sukhothai got under the ruling of Ayutai country founded in 1350. Ayutay and Chiang May kingdoms that appeared in the North protected their territories from Khmers and Birmans. In 1569 Ayuttay Kingdom was seized by Birma, but after a while the seizure ended, and Ayutay and Chiang May with surrounding lands became Kingdom of Siam.

Specific culture started its formation there for the following 400 years. In 1767 Ayuttaya, the capital of Siam, was seized by Birma again, and totally destroyed, but Thai General Taksin destroyed Birman Army later. His comrade P’ya Chakri became king of the country (Rama I), and founder of Chakri dynasty. In 1782 Siam’s capital was moved to Bangkok.

Later Siam kept actively developing in multiple directions keeping open relations with the Europeans. During Rama V ruling the kingdom was accepted to the global community, and in 1932 the revolution changed absolute monarchy to constitutional.

In 1939 Siam was renamed to Thailand, “country of free” or “land of Thai”. During the 2nd World War it was Japan’s ally, that tried to avoid losses during seizure of Malaysia. After the war was over, Thailand supported US, and for the following next years several riots took place in the state.

Thailand is acknowledged as one of the most popular touristic destinations in the world, n tourists love the country as well. Multiple web-sites with trip advices listing what can be brought form Thailand mention Thai carpets. Each such carpet is real masterpiece, as it is fully handmade, decorated with gorgeous ornaments, and is made of real natural silk.

Delivery World shipped lot of such carpets from Bangkok in the end of November. The customer is finalizing customs processing of the cargo, and who knows, maybe the caped delivered by us will be decorating your home.