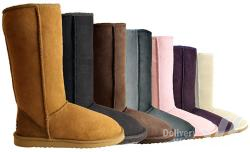 UGG is the first thing coming into mind when Australian footwear is mentioned. UGG are comfortable, light, extremely warm and soft.

Interesting to know, that UGG appeared in the Southern Hemisphere in Australia which is famous for sheep breeding. Farmers and shepherd felt cold during winter. So they started to search for the ways to protect themselves from cold and strong winds. They used coats, jackets, and invented special shoes made of sheep skin. Of course it looked nothing like modern UGG, but still was warm and comfortable. Such shoes created by Australian shepherds was called ugg, which means something ugly and not nice.

Brian Smith, Austrian surfer arrived to competition in US wearing this shoes, and since that time from 1990s UGG became known to US, and kept gaining popularity.

Americans prefer comfortable wear loved cozy UGG. Designers using its popularity, shaped and styled it, and UGG entered mass market, including online shops. Today anyone can buy original UGG. The boots are famous all over the world, and Arr Australia that was the first manufacturer of UGG, gained unbelievable profit and success.

Original UGG are made only of real sheep skin. The fur is processed, and material becomes light, but heat-insulted properties are preserved. Unlike other footwear this boots do not have additional layers, just fur. The shoes have light way due to foamy spongy rubber sole. One can even feel bouncy when walking, but still the sole is very firm. Moccasin type of stitching also ensures comfort.

UGG are worn all the year round. Feet do not freeze in winter, and in summer they consume sweat. There are even special UGG for wet seasons, that do not get wet and are water resistant.

n winter is right behind the corner, and in the end of November Delivery World shipped lot of original Australian footwear and shoe cosmetics . The customer completed customs formalities, and warm boots are already waiting their buyers in shops.