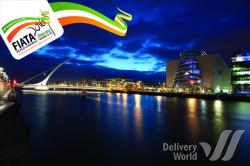 3 to 8 October Dublin (Ireland) hosted FIATA World Congress 2016, the event of the global importance. The world congress of the Freight Forwarders Association (FIATA) is held annually. Over 30 reputable speakers shared their innovative ideas and expert opinion on development of cargo transportation, logistics, and world trade during the event. The leaders of the organizations from Africa, Asian Pacific Region, Middle East, America, and Europe attended the congress.

Official signing by IATA and FIATA of reforms was called "historic agreement" in logistics. The new IFACP is aimed to engaging consignees as equal partners in decision making process in transportation logistics; as well as deciding on the rules that may govern relations between airlines and forwarders and consignees within IATA – FIATA Governance Board (IFGB). The program will be implemented jointly by consignees and airlines, and will represent current market conditions. IFACP will be implemented stage by stage from the beginning of 2017 in Canada, chosen as the pioneer stated and will be fully implemented by the end of 2018. On signing ceremony IATA Senior Vice President Alex Popovich said that preparations to signing the agreement required 4 years, but its implementation will require a lot of work, as it has to cover all markets within 2 years.

The World FIATA Congress 2016 in Dublin covered several important issues and questions. The key issues discussed on the Congress this year were compliance with anti-corruption legislation, customs and borders, innovations, multi-modal transportation, legal regulations, and security. The special emphasis has been made on high technologies, and for this purpose several companies offering technological novelties, and software aimed to increasing business efficiency, were present on the Congress this year.

FIATA World Congress 2016 became unique opportunity for business owners and managers representing global freight forwarding and logistics to meet for exchanging experience, networking, and business development. During the visit to the Congress Delivery World's representatives didn't miss a chance to share their experience, to tell about our company, and to establish several new connections with the managers of the largest companies in the world. They returned back with several prospective cooperation offers and new contracts as well.