Registration
Home » About Us » News » American Smile: Toothpaste by Airfreight from New Orleans 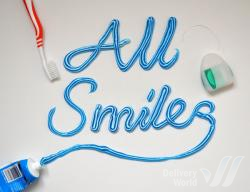 Tooth powder appeared in the 18th century in UK, and consisted of brick dust, clay, phosphor and glycerin to enhance the favor. Later crushed bark, wood coal and even aromatizers, and strawberry flavor became the most popular.

The first toothpaste in a can appeared in the end of the 19th century in the US, and later tubes replaced cans. In the beginning of the 20th century some toothpastes could not only refresh a mouth, though till nearly mid of the century most of the pastes contained soap.

Tooth powder was used for long time in the Soviet Union. Toothpaste in tube appeared only in 1950, and immediately became popular and became real deficiency on consumer market.

In the beginning of June Delivery World shipped expensive toothpaste from New Orleans . Our customer has accomplished customs formalities, and soon toothpaste that makes real American smiles will be available for sale in the n capital.