Registration
Home » About Us » News » Weighted: Strain Gauges and Weight Equipment from Amsterdam 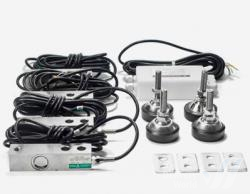 The first scale found by archeologists are dated 5 century B.C. Ancient Egyptian Book of Dead tells about Anubis weighting hearts of dead on Scale of Truth.

In measures of weight and length were controlled by church. Even monastery keeper’s office was established to control accuracy of measurements. Knyazes, and tzars later took over control of measurement accuracy. Yet, it was hard to see everyone involved in trade. To reduce risks of fraud, Ivan the Terrible prohibited traders from owning scales and weights. They were allowed only to use state treasury scales. No doubt this was extremely hard to follow. Feodor III found solution, and introduced mandatory labeling of all weighting equipment. Peter I declared mandatory verification of all weights and scales. It was even more hard, due to absence of common standards that were introduced only in 1736.

Weight measuring and strain gauges (gauges transferring deformation value to measurable usually electric signal) were shipped by Delivery World from Amsterdam in the middle of May. Expensive cargo reached the n capital safely and just in time, due to years long experience in arrangement of perfect delivery of any types of cargos by any destinations of Delivery World.