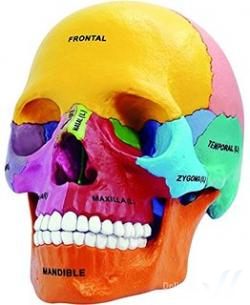 Human head is a complex system consisting of various bones, joints, and other elements. Human skull (lat. Cranium) is bone base of the head, consisting of several bones. Complex of sciences studying types of the human and animal head is called craniology. The scull represents the base made of 23 bones protecting head brain from damage; it has 8 paired and 7 non paired bones. Human skull is referred to the bone and locomotor system, and is divided in two main sections – facial and brain. Skull sections play separate roles and have impact on the body in whole.

Early medicine used both life and dead persons as models to study human body. Of course this times has passed, and the methods are no longer applied, modern medicals use variety of materials and models, made of quality and long service materials, copying every detail of the human bodies. Human skull model is one of such materials. The models are made of light and non-toxic materials, using the latest technologies, and do not harm human and environment. Even though all parts of the skull are joined to each other, it can be easily separated to ease studies.

Nobody knows who was the first to create human skull model. In the mid of the 1990s one German couple bought small human skull model from antique shop, that later became reason for many disputes of its origin. Some scientists think it could be made by Leonardo da Vinci himself due to being anatomically precise, and made in the times of Renaissance. Its size was the only difference from the real skull (it was 3 times smaller), yet it represented exact copy of the skull, with only lower cheek bone and jaw missing.

Skull models are used in the schools for anatomy lessons, in the higher medical institutions, in the medical centers, and in the art schools. Human head is one of the most complicated objects to draw, therefore, the artists are taught step by step, where the first step is learning the principles, and laws of human head drawing, and starts with its constructive base and shape, i.e. anatomic skull structure.

In the middle of June Delivery World shipped lot of the human skull models from Shanghai to Krasnodar, and now, with the help of this models, the classes in the educational institutions of Krasnodar will be more interesting, and the knowledge will come easier.