Registration
Home » About Us » News » Able to Change Everything: Delivering Shoes from Hong Kong, Beijing and Shanghai

Able to Change Everything: Delivering Shoes from Hong Kong, Beijing and Shanghai 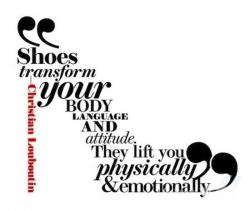 It is said that a good pair of shoes can change your body, mind, soul, and life, which was proved by Cinderella.

Ancient people had to suffer; they had to walk bare foot on the earth covered with lots of sharp stones. The day they understood that they have to protect their feet, the first shoes came to existence.

Of course the first shoes were alike modern sandals, and were made of pieces of wood, strips of leather and grass, adjusted to feet using ropes tied over the ankles. Of course this kind of footwear could not work in cold climate, where feet were simply wrapped in leather.

Egyptians were the first to wear shoes. They made soil of papyrus or leather, and tied it to the foot using two belts, the front. They bound the shoe cap to protect the big toe as well.

Romans invented sandals with wholes and belts tied in the centre. Those sandals of the nobles differed from others that were prohibited to wear the “noble” shoes.

Separately from each other the people living in cold areas created warm shoes. First it looked like sacks stuffed with grass and tied to the feet, and later American Indians and Eskimo people invented moccasins.

Crutched Friars were the first to wear shoes similar to modern. Necessity to cross long distances urged them to have shoes that could protect feet, be comfortable for walking, and serve for long time. Later the shoes turned into pieces of arts, and were made of expensive fabrics and beautified with precious metals and stones.

Shoes have always served fashion; the rules of old times have issued the laws banning specific classes from wearing some models, and making some types of the shoes inappropriate for specific places.

Modern world counts hundreds if not thousands types of the shoes designed for different purposes and dress styles. Most of the shoes just like clothes are made in the South West Asia.

In the end of June Delivery World shipped large lot of the shoes from Hong Kong, Beijing and Shanghai . When it comes to transportation arrangement, the timelines and safety of the goods in route become critical, that is why our cooperation with many customers lasts for decades, and newcomers rely on us easily. Years of work have proved our company to be reliable agent giving utmost attention to the smallest details of transportation, and able to arrange it in a way that the goods will surely arrive to destination safely and in time.