Registration
Home » About Us » News » For Party Lovers: LED-Bracelets from Hong Kong by Airfreight

For Party Lovers: LED-Bracelets from Hong Kong by Airfreight 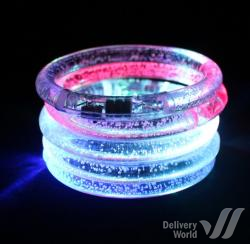 Henry Round was the first to report light radiation by diode in 1907. Later diodes have been studied all over the world. Nick Holonyak is considered the "father of the modern light diode", he was the first to develop practically usable diode in 1962.

The diodes remained very expensive till 1968 (about $200 for a piece), and its practical application was very limited. Jack Pankov from RCA Laboratory held several studies that lead to industrial light diode production, and was the first to develop blue light diode in 1971. Monsato and Hewlett-Packard were the first to apply LED in indicators and pocket calculators.

For invention of low-cost blue LED in 1990 by Isama Akasaki, Hirosi Amano and Sudzi Nakamura, they were awarded Nobel Prize in Physics (in 2014).

At present LED are widely used in industrial and house lightening, as indicators (for instance in control panels and digital screens), in street screens and lines, as source of light for lamps and traffic lights, in remote controls, Internet, phones, road signs, screen lightening, Duralight cables, watches, agriculture, toys and signs, and, without a doubt, one cannot imagine a party without bright lightening LED bracelets and accessories.

In the middle of March leading airfreight forwarding company Delivery World performed airfreight shipment of LED bracelets from Hong Kong to Moscow. Customs proceedings will be finalized by the customer soon, and shortly the bracelets will be available fro sale in Moscow shops.