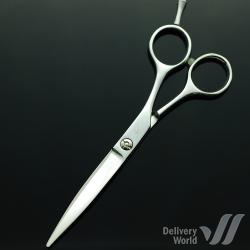 Scientists consider Italy motherland of scissors. From the other side, many scissors were found in the tombs located in Northern Germany, and this allows to consider that ajoint scissors is German invention.

In many languages the word scissors looks plural, which reflects its ancient specifics. People used two separate knives not adjoined to each other. One had to use both hands working with such scissors; holding the lower knife with left, and moving and adjusting blade of the upper knife to be able cut with right hand. This simple, yet uncomfortable way of cutting, existed in antique culture for ages, nevertheless adjoint scissors were known in Mediterranean and German cultures.

Manicure and calligraphic scissors with thin blades for cutting paper were gifted to Europe by Arabs. In the 14th century scissors started its transition from iron utility to fashionable and useful accessory. Men started gifting scissors to ladies, and soon scissors became associated mostly with women and women types of activities.

Today the instruments marked as “Made in Japan” are considered as standard of quality and reliability. It is well known, that the Japanese have hard and thick hair, therefore the companies producing professional hairdressing equipment follow the highest manufacturing standards. It is also important that the Japanese managed to preserve centuries old traditions of production of steel, and quality instruments.

In the end of November Delivery World shipped lot of the Japanese scissors from Tokyo . The customer is completing customs processing of the sharp cargo in Moscow, and soon the delivered scissors will appear in hairdressing salons of the n capital.