Registration
Home » About Us » News » Perfect Cut: Hairdressing Scissors from Italy by Airfreight 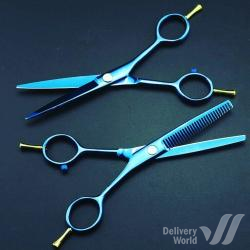 Hairdressing scissors have become markedly smaller in the last half century. Up until 50 years ago, every hairdresser used long scissors with a 6 - 7 inch blade being the norm.

Vidal Sassoon changed it all, a great exponent and founder of “Precision Cutting”, an approach focused on cutting in small sections with a very short 4.5 -5inch blade. When Vidal Sassoon showed us how to cut hair in very small sections with absolute precision, it was like someone had rewritten the rule book. Such was the influence on the world of hairdressing that everyone wanted a very short pair of scissors like his. This led to a trend among stylists who adopted the mentality of “The shorter the blades, the more precise your work would be.”

This then meant of course that the ‘Trend’ was to buy a shorter scissor. A 5 inch scissor is now the standard length for a short blade and it is designed to be used primarily when cutting inside the fingers and the palm of the hand. If you try this now, even without hair in your hand, you will see how easy it is to rest the bottom blade of the scissor on the inside edge of your middle finger.

After the Sassoon influence nothing much happened until the 1980`s when out of London came Tony and Guy, who would become hugely influential figures in the world of Global hair fashion. This school of haircutting, heavily influenced by Antony Mascolo then began using a much longer blade (6inches and longer).

In the middle Delivery World shipped lot of quality Italian hairdressing scissors by airfreight. Our regular client is finalizing customs processing of the cargo, and who knows maybe your hair stylist will use scissors brought by Delivery World.