Registration
Home » About Us » News » Industrial Titanes: ToughBooks from Shanghai 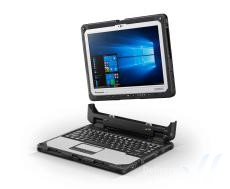 Grid Compass the first notebook in history appeared in 1979. It was ordered by NASA. Grid Compass weighted 5 kg, was equipped by Intel 8086 with 8MHz and 340kB. The laptop was often used on board of the shuttles in 1980-1990s of the last century. Due to inability to work from battery, high cost, and specific software, it did not become popular, and remained only space technology.

Osborne 1 had great commercial success, causing enormous raise of interest to this prospective area among different companies, and leading to establishment of large number of companies developing and creating notebooks. Compaq, Epson, Apple, and Toshiba were among the first.

Toshiba T1100 that has entered market in 1985 is often called forefather of the modern notebooks. Distinguished for monochrome 640x200 LCD, equipped with 4.77mHz Intel 80C88 processor (with reduced power consumption) and floppy disc slot for 3.5' discs for 729kB. Since that time Toshiba keeps leading positions on the global laptop market.

Mass production of the notebooks started in the end of the 1980s. Each new generation of notebooks is more compact, more productive, has more options, and approaches desktop computers to extend that it nearly removed it from the market now.

ToughBooks are the notebooks placed in special bodies that protect them from dust, water and humidity, heat, explosions, and other occurrences that may cause death to regular device. The lot of such "immortal" industrial ToughBooks was shipped by Delivery World in the beginning of July from Shanghai . The customer performed all customs formalities himself, and delivered devices are already available in the specialized showrooms of the n capital.