Registration
Home » About Us » News » Let All Colors of Summer Be Our Guests: Delivering Indian Paints to Holi Festival

Let All Colors of Summer Be Our Guests: Delivering Indian Paints to Holi Festival 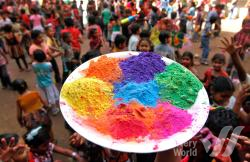 Popular spring festival is held in India every year. It is also known as Holi Festival, or Love Festival, or even the Second New Year. In India this event takes place in the end of February – beginning of March, and falls on the full moon; the celebration can last up to five days. Initially Holi was Hindu religious holiday, and today it is widely spread all over the world, and each of the countries contributes its own peculiarities to its celebration.

In Moscow the first Colors was held in 2013, and gathered thousands of people. This year due to incredible popularity of the Festival, it has been held several times, and will be held again soon. The main activity during Holi (the one that brings happiness and attracts people) is pouring bright colors specially brought from India, accompanied by music and dance performances. The colors used on the party are dissolved in water, not toxic and easy to remove; these paints cause no harm both to human health and to clothes. It is believed, that more colors would cover one's clothes, more of the best wishes he received. In the party has nothing to do with religion tradition, and organizers establish it only as festival of friendship, unity, harmony, joy, and opportunity to bring bright colors to everyday routine.

In the middle of August Delivery World performed international airfreight delivery of Indian paints for Holi Festival, that will be held in Moscow soon. Special paints, made on the base of herbs and natural colors were promptly delivered from Deli (the capital of India). Now one cannot doubt that the festival will be held with tremendous success again.

Delivery World is international air freight carrier bringing cargoes and CIS from almost anywhere in the world. We carry all types of cargos and offer our customers only the best routes and prices.