Registration
Home » About Us » News » Innovative Magic: Delivering Graphene from Bratislava by Airfreight 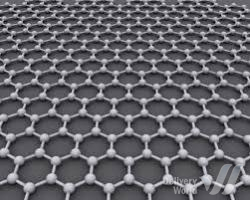 Graphene was developed in 2004 Manchester University by British scientists of the n descent Andrey Geim and Konstantin Novoselov. So what is graphene? Today it is the thinnest material in the world consisting of single carbon atoms layer. It can be received from graphite, known to everyone from pencil lead. Graphene structure looks similar to bee combs, as its atoms are arranged in hexagonal crystal net having maximum density "package". Earlier the researches assumed that such single-layered crystals do not exist in general. Yet, the scientists managed to get single atomic surface from graphite crystal. That's how they received material having unique properties, and got awarded with Noble prize in 2010 for their discovery.

Graphene has properties that are not available with any other materials, I tis really like fabric. It can be fold as paper tissue and will never brake. In other words the one atom thick graphene is stronger than steel. It perfectly conducts electricity, and its melting temperature exceeds 3,000o C. Yet, it has even more amazing properties. It is flexible, transparent, highly conductive, and, seems, to be resistant to most liquids and gasses.

During the last decade graphene became a real breakthrough in scientific world, and it is now applied almost in every sphere of human activity. It is used for growing bone tissues, neutralizing cancer tumors, collecting nuclear wastes, foam plastic production, and electro mobile manufacturers are trying to utilize it for battery production.

Graphene is widely used in smartphones and handheld gadget production. There are projects of smartphones which can be folded as paper. There is transparent yet showing information display. Graphene will also become material for fitness trackers that can follow nerves activity, and receive data directly from body cells. Graphene is studied by the largest world companies: Samsung, Microsoft, and IBM. Apple has applied for several patents for new technologies utilizing this material.

In the very beginning of May Delivery World shipped this super material from Bratislava . As always it managed the task with the highest degree of expertise. We will keep waiting for the new developments and innovations related to utilizing graphene on the n market.