Registration
Home » About Us » News » At the Sight: Delivering Laser Pistols and Training Targets from Germany

At the Sight: Delivering Laser Pistols and Training Targets from Germany 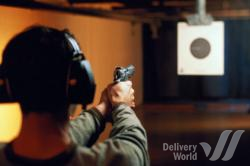 Target shooting is rather unusual type of sports, which is yet popular among many ns. The history of the shooting sport is relatively short. It started bit more than two centuries ago, in peaceful time, and it became possible to shoot not only at war. The pigeons were the first shooting targets. Regardless relatively young age, shooting has been immediately included to the Olympic Games revived in the end of the 19th century.

Modern shooting sports is divided to bullet shooting, were the shooting is made at gunpoints, and trap-shooting at special flying plates – targets in the open booth. Apart of common training shooting, live practice - the new type of this sports has gained popularity in recently. This is the third year in a row Moscow opens competition for NovikomCup – the international level competition for live practice shooting in covered shooting ranges. The difference of such shooting is that the conditions here are closed to reality, as if the shooter is involved in military operation. Withthis, theshootermaystand, sit, orlay.

Target shooting is remarkable for providing opportunity to engage in it for anyone, regardless the gender and age. One requires just special equipment. Of course, first of all it requires shooting guns and targets.

In the second half of January Delivery World performed international airfreight delivery of laser pistols, training targets, and special equipment from Germany . Our company was chosen as reliable forwarder, after we presented our services on the international arms show SHOT Show 2016 in Las Vegas.