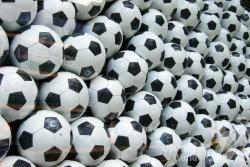 Football is team sports, where one has to put ball in the gates of the opponent using feet or other body parts (except hands) more times than the other team. Nowadays it is the most popular mass sports in the world. Each team has three types of the uniform: basic, guest, and reserve. Colors of the football uniform, as well as peculiarities of details, such as type of the t-shirt's collar, sleeves, are defined by football club and correspond to specific traditions. Specific uniform usually changes before the next season. Reserve uniform is used instead of the main, if there is a problem in differentiating basic uniform sets of the teams.

Starting from 1980s first in Europe, than later in post-soviet added the nickname of the player under the name on the back t-shirts above the numbers. This tradition just like numbers from 1 to 99 comes from hockey. Nowadays, numbers of the players are also located on the shorts, usually on the front side.

Before the players had to wear thick cotton shirts, breeches, and heavy leather boots. Modern uniform consists of lightweight soft boots, shorts got shorter and softer, and t-shirts lighter, and greatly vary. From the mid of the 20th centuries sponsor's logos were placed on the uniform, and the uniform became available for sale to increase the club's revenue.

Judges and their assistants wear uniform differing them from players by color, black color is preferred.

There are three varieties of the modern football: big, mini and beach football. The balls used in each of this games differ. Not specialized football shops usually sell balls of size 5, as it is the most popular, big, and is used by everyone's favorite football players you see on TV. FIFA sets several requirements to the professional balls, at most relatedto the size, material, and etc. The balls undergo several tests, and get qualified as FIFA Quality Pro, FIFA Quality, IMS (International Match Standard).

The ball used for beach football atmost differs from regular one by bright color. While mini football ball is not only smaller, but should correspond to the rule: if such ball falls from 2 m height, the first time it jumps from the ground should not be lower 50 cm and higher 65 cm.

In the beginning of August Delivery World shipped lot of the football equipment and balls from Belgium to Moscow. We hope that the new uniform and equipment will bring luck to players, new feelings and positive emotions to fans