Snowfalls Become the Cause for Transport Collapse in Europe 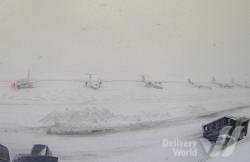 Snowfalls caused real transport collapse in Europe. Up to 40% of the flights got cancelled in French airports, and each 5th flight is cancelled in Heathrow.

Poor visibility caused by fog that covered the city from morning, caused additional complications in the UK. During the last two days over 500 flights got cancelled in Heathrow.

Over 130 flights were cancelled in Frankfurt am Main. Belgium, Charleroi Airport does not accept aircrafts, and several flights were delayed in the international airport in Brussels.