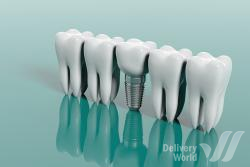 Artificial teeth were affixed with metal ribbons (often made of gold and silver) and the ends of such ribbons were attached to the neighboring teeth. Animal teeth were the most used in the Middle Ages. Quite often, teeth removed from dead people were used for implantation as well. Poor people used to sell their teeth in England and American colonies.

In the 18th century porcelain teeth were popular in the USA. Such teeth were more hygienic then teeth used before. 19th century became the turning point for development of dentistry in general, and history of implantation in particular. It revealed new dentist materials and methods, successfully applied till today.

Nevertheless, implantation attempts of the 19th century were rare and were not supported with scientific researches. Absence of knowledge of antiseptics, immunology and tissues compatibility has led to poor results.

Scientific and technical revolution of the 20th century gave a push to dental implantation. 1930th brought first scientific discoveries in implantation history. Threaded cylindric implants, chrome-cobalt implants and many others were developed in that time.

Today implantation is routine operation, and has reached major success. Dental implantation dramatically changed traditional approach to treatment, improved results and increased quality of prothesis. Express teeth implantation methods are of great demand today. Search of improvement technologies is still not over, so the history of implantation has long way ahead.

In the middle of December Delivery World shipped lot of teeth implants from Switzerland. Fragile and valuable cargo can only be handled by a company with unlimited trust. That is why our customers again and again chose Delivery World. Years of experience of our company in arrangement of any cargos transportation to any direction serves guarantee of safe and timely delivery.