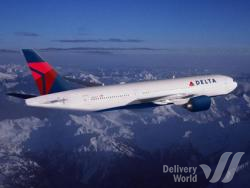 The service is not terminated, but there will be a different route, according to the representative.

Passengers will have an option to fly to New York from Moscow via Amsterdam or Paris, from where Delta Airlines operates with its partner Air France/KLM, the representative said.

According to the booking service on Delta Airlines' website, there is a direct flight from Moscow to New York's John F. Kennedy International Airport (JFK) scheduled for Tuesday. The website also offers a connecting flight to New York from the Paris Charles de Gaulle Airport made jointly with Air France.

There are no direct flights from New York on September 6 on the company's website. Starting September 7, the airline's booking service offers only flights with one or two changes of planes in Amsterdam, Paris, Boston, Detroit, Atlanta, or the Minneapolis St. Paul International Airport. These flights are operated jointly with Air France/KLM and arrive in JFK, Newark Liberty International Airport, and LaGuardia Airport.