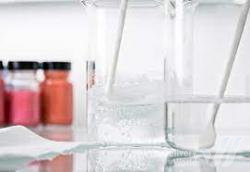 Kohl was ancestor of modern mascara. It was made of crushed mineral and used for the space around eyes and lashes. First mascara was made of coal powder and Vaseline. No doubt apart of being not clean hygienically, it was very hard to apply, and could not become popular product. Mascara similar to modern cream mascara with nylon brush appeared only in 1957.

Lipstick was made of wax or animal fat, and color obtained from poisonous sea weed. It started to become popular in the 15th century. All of it was made of carmine, red color, received from insects. In the end of the 19th century manufacturers started to add oils and wax to it, thus the color became more natural.

People started to dye hair around 4,000 years ago using Chinese cinnamon and scallops. Black and dark brown were extremely fashionable in Ancient Egypt, and were received using henna and kohl. Those colors were symbols of power and high social status. Blonde shades were popular in Ancient Rome, and herbs, Aiwa, ash or simple extensive sun exposure served this fashionable purpose. First synthetic hair colorant was created in the beginning of the 20th century by L’Oreal founder.

Ancient Chinese were the first to apply color on nails. Local nobles let the nails grow long, showing that they did not have to engage in physical labor. Women could color nails with enablement made of herbal color, egg white, gelatin and wax. In the 15th century Chinese fashionistas used to color nails silver and gold, and during Min dynasty ruling nails were colored black.

1939 gave birth to idea that defined world cosmetic industry development for decades: nails and lips had to be of the same color. And this color was red, variety of red shades till today are the most popular among women.

In the end of May Delivery World shipped lot of raw materials for cosmetics production from Hong Kong . Cargo preservation of which requires strict compliance with all requirements to storage and transportation may only be trusted to the one having your unlimited trust. That is why Delivery World with its expertise in transportation of any cargos remains choice of our regular customer.