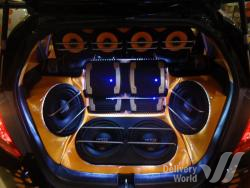 History of vehicle sound systems started in Great Britain in the first half of the 20th century. The first automobile produced in the UK in 1920s became real sensation, and was of great demand. Later more and more cars were equipped with automobile sound systems.

Till mid of 1960s automobile systems were permanent and preinstalled in the vehicles, and car receivers were produced by vehicle manufacturers themselves. Removable receivers appeared only in the middle of the 1960, when the first specialized producers of car sound systems came to the market. Sony’s launch of cassette receiver became the next milestone in car sound history. Even though cassette recorders existed before it, they were too big and would occupy half of the car, so nobody used it. Following cassette recorder creation, auto sound systems started its rapid development across the world.

1990s brought receivers equipped with CD players. That is when sound quality got special attention. Noise reduction, various sound boosters and many other devices and units improving sound quality appeared in this time. Car sound now is not only receiver, but whole system consisting of many elements.

In the middle of January Delivery World shipped lot of car sound systems from Israel. Our customer is completing customs processing, and soon the delivered sound systems will appear in the leading automobile centers.