Registration
Home » About Us » News » Right to the n May Holidays on Dacha: Delivery World Brings Cucumber Seeds from Budapest to Krasnodar

Right to the n May Holidays on Dacha: Delivery World Brings Cucumber Seeds from Budapest to Krasnodar 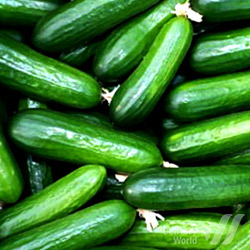 Since long time cucumber is one of the most common vegetables on the tables around the world, yet, one hardly knows that it is not so common.

The cucumbers were known even 6,000 years ago, it comes from lianas growing in South-West Asia, and reaching up to 20 meters in its height. Melons, pumpkins, and sprouts are the closest relatives of the cucumber. Cucumbers were known in Ancient Greece, and it is where its name "aguros" meaning "not ripe" comes from, as everybody knows the younger the cucumber is the better taste it has.

Inhabitants of the islands in the Pacific Ocean valued cucumbers so high, that considered it dowry of the groom: after making proposal a young man had to present his cucumber stocks to the bride's parents, and only after having it evaluated, her parents would agree to marriage. The precious cucumbers were carefully stored there wrapped in banana leaves and in the ground.

Till now some nations use cucumber to prepare deserts and sweets: Iranians consider it a fruit, and serve as desert, and on Cypriots prepare delicious cucumber jam.

Napoleon promised reward for the one who will find solution that will have to keep cucumber fresh during the war marches, yet no solution was found, regardless huge amount of the reward he promised. Monasteries used to grow plenty of cucumbers, believing that young cucumbers and their seeds will help the monkhood cope with sinful desires. The world even celebrates the International Cucumber Day on the 27 of July.

In the middle of April, right before commencement of dacha season and planting works in , on request of our regular customer Delivery World shipped cucumber seeds from Budapest (Hungary) to Krasnodar (). The customer is completing customs formalities, and soon Hungarian cucumbers will be growing on the farms and dachas of Krasnodar.