Registration
Home » About Us » News » Enjoy viewing! 3D-Glasses from Shenzhen 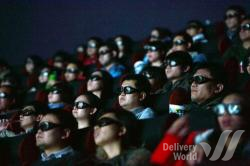 Cinemaphiles cannot imagine viewing new film without 3D-glasses. 3D-glasses are designed to view stereo film where the dimensional image is achieved by creating images that are seen differently due to being shot from different points. Both eyes are required for binocular sight that allows seeing dimensional objects. Each of the eyes sees flat (2-dimensional) image. As the eyes are distant from each other (such distance is 58-72mm for adults) the brain receives the image of the same object from two points of view, the so-called parallax, turning to dimensional image in result of processing by brain. Binocular sight principle forms the basis for 3D films and 3D photos. Video or photo camera with two objectives are distant from each other just like human eyes, produce image reflection forming stereo pair. Making these images seen by both eyes allow brain to process 3D image. Different ways of viewing result different types of stereo pairs.

Most of the people believe that 3D images are relatively new, and were brought only by 21 century's technologies. It might be surprising to know, that the first 3D technologies appeared in 1922. William Frieze Greene was the first to receive patent in this sphere. Much later Americans popularized 3D films using improved technologies.

There are several types of 3D glasses: