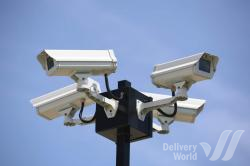 Human always needs to feel himself safely, no matter whether he is at home, work, guests, or on vacation. Not by chance American psychologist Abraham Maslow in his theory of human needs hierarchy put safety on the second place, right after physiological needs such as hunger, thirst, and etc. According to him, the perfectly happy society is society of not hungry people, having no reason to worry.

Sadly in our time one cannot always feel himself safely, and regardless efforts of law enforcement bodies staff the crime level remains high.

Moscow is on the first place by crime level in Russia, and in 2014 the number of crimes registered in it increased by 4.5% compared to 2013. Theft, robbery, blackmailing, bribery, murder, rape, armed robber, - all this happens on Moscow streets daily.

Nowadays video surveillance systems get more and more popular among security systems. It is widely used for monitoring in offices, public and crowded places, and at home. Video cameras significantly reduce the number of thefts and spoilage, received records can be used for resolution of dispute, and can also serve material evidence. Yet, if the crime still occurred, it becomes much easier to identify, and to find the criminal.