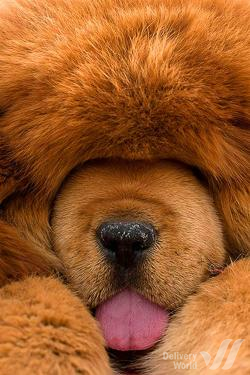 The name of this breed speaks for itself: these dogs come from Tibet Mountains. Centuries ago these dogs used to live there with monks, guarding monasteries, and travelling with nomads. Tough weather conditions of Tibet made mastiffs adopt to circumstances, become strong and powerful. The mountains protected them for external influence, and the breed remained clean preserving all its best qualities. Tibetan mastiffs are known for long time, they are mentioned in records dated 13 century. Aristotle and Marco Polo have met those gorgeous dogs too. The legend states that those dogs belonged to Buddha.

Mastiffs entered Europe only in the 19 century. The first one was gifted to the English queen, and some later two more dogs were brought from the Asian trip. In 1989 the first pups were born in Europe.

Modern Tibetan Mastiffs are really large bread whose weight may reach up to 100 kg, but there are sayings stating that these dogs used to reach size of a donkey before.

Tibetan Mastiffs are the most expensive dog in the world. It has beaten its own record; in 2009 a puppy Mastiff was bought for USD 600,000, and recently Chinese Millionaire has purchased another one for amount equal to nearly USD 1.5 mln.

Obviously these gorgeous giants require special nutrition. In the middle of July Delivery World shipped lot of Tibetan Mastiff dog food from Brussels to Moscow. Delivery of a cargo where safety can be triggered even by minor fluctuations of weather and humidity may only be rendered by a company that you give your unlimited trust. That is why our customer has referred to Delivery World again, and the dog food we delivered is already enjoyed by many Tibetan Mastiffs in the Russian capital.