Registration
Home » About Us » News » Stay Fit! Delivering Sportswear and Accessories to Moscow 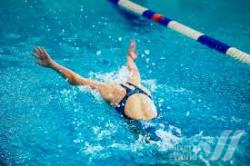 Earlier we shared some facts from sportswear history. Swimsuit history is not less exiting.

Swimwear in modern understanding appeared only in 20th century, but nevertheless ladies has never refused themselves the joy of swimming during summer heat.

There was no swimming during the Middle Ages in Europe, people were even scared of water, and therefore no special wear for swimming existed until 18th century. That was the time when the first resorts were opened, and ladies needed special clothes to get inside the water for medical purposes. Swimwear of that time was not much different from usual clothes. Ladies had to wear hats on the head, stockings and textile shoes under the dresses, and attach special small weights to the bottom of their skirts to prevent it from floating.

Swimming became part of the Olympic program from the end of the 19th century, and even the men wearing swim brief caused wide response in society. Nevertheless, even women swimwear got lighter by that time, and consisted only of blouse attached to shorts, and a skirt dressed over it; shoes were no longer required for swimming.

None of the models wanted to demonstrate bikini that appeared in 1946. First worn by pole dancer it was criticized for over 10 years by all fashion magazines, but by 1960 replaced all other types of swimwear.

Sports and healthy lifestyle get more and more popular nowadays, and at some point sportswear is even replacing the jeans, and accessories initially designed for professional sports become part of everyday life. In the end of December Delivery World shipped swimwear from Leon, fitness wear from Pakistan, and wristlets from Shanghai to Moscow. Who knows, maybe this sport accessories will help you and your dear ones to stay in shape in the new year.