Registration
Home » About Us » News » To the Battle for Stalingrad: delivery of technological innovations to the film set

To the Battle for Stalingrad: delivery of technological innovations to the film set

Not long ago, Delivery World has performed delivery of animatronics and professional make-up from USA for the epic 3D war drama “Stalingrad” by Fyodor Bondarchuk. Particularly we transported animatronic full-size puppet imitating injured man body, which is a robotized system as a matter of fact. Cargo delivery was done in short terms, the cargo was transported directly to the film set because the blockbuster began shooting in September.

As Ilya Sherstobitov, CEO of Russian unit of international special effects makeup studio, commented, “for such a dynamic industry as Film industry  it is important to have technical base prepared in set terms, especially this refers to full-length film producing. But the speed of preparing must not reduce the quality of producing. That is why our company actively adopts unique experience of American makeup and special effects artists, produced more than one Oscar-winner movie. And that is why we choose reliable partners for delivery of necessary technical components for creating special visual effects. We are grateful to Delivery World for professional freight forwarding and delivery of cargo safe and on time. And our work will be presented to movie-goers in ‘Stalingrad’ which release is scheduled for 2013 to be timed with the 70th anniversary of the Battle of Stalingrad.”

And there are two shots from the film location. 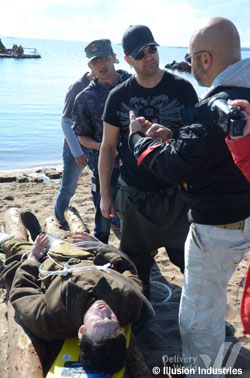 A “Dead-man body” puppet and a performer in a water: 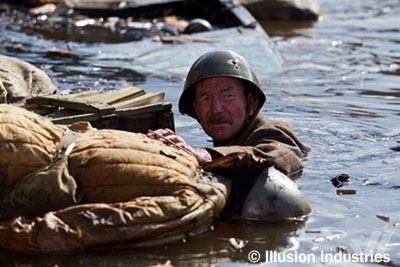