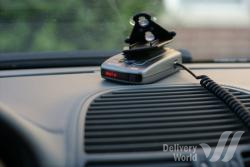 The owners of the modern automobiles in addition to standard hi-tech electronics equip it with different micro processor gadgets such as GPS navigators, video recorders, and radar detectors. There is different attitude to the latter in the world. Most of the European countries do not welcome its usage. For example, radar detectors are prohibited in Poland; the driver will get considerable fine for using such a device in the car in Austria and Switzerland, and in Luxemburg one might get even a real term in jail.In opposite, in Germany such detectors are not only allowed, but sometimes road police holds special campaigns granting radar detectors as a gift to the drivers.

In Russia usage of radar detectors is not prohibited under the law, and is not subject to fines, as their work does not interfere into work of the monitoring radars of the Russian Road Inspection. Some experts consider that usage of such equipment leads to decreasing the risk of the accidents on the road, as the signals of the radar detectors make the drivers reduce the speed, thus comply with the set speed limit.

In the beginning of November our regular customer sent us request for delivery from Seoul (Korea) of the rather large lot of the latest highly sensitive radar detectors equipped with displays showing detailed information on monitoring devices, and producing sound signals through speakers when approaching police radars.

Delivery World performed international airfreight delivery of the said equipment to Moscow in the mid of November. Soon, the devices will be available for sale, and will not only inform the drivers on approaching radar, but will allow them to drive carefully following road rules.