Registration
Home » About Us » News » Fire Party: Delivering Fireworks from Milano to Moscow

Fireworks last no longer than a kiss of your love, but cost more than a mistress

Just like Chinese Italians were known as the best in making sophisticated and colorful fireworks, and became world leaders in its production. In 1300 the famous merchant from Genuya Marco Polo purchased the fireworks composition secret from Chinese, so Italy became the first country in Europe to know it.

The fashion of decorating special events with fireworks was established by Peter I, that borrowed it from Germans. On February 26 1690 the 18 year old Peter ordered to make the largest fireworks in Russia, for thrice the cannons shoot 56 times, and the rockets flew out of the tsar's hands without a stop. The amazed public saw Hercules opening the lion's mouth on the sky, and the fireworks master was awarded with the Preobrazhenskij Polk uniform by the tsarist's order.

Fireworks have always been expensive. For instance, in Russia one firework cost was as much as 10,000 Rubles, while one could buy a cow for 3. Only wealthy people could allow themselves having a "fire party", and made fireworks not just entertainment but part of luxury life, as it can make of any event special and bring charm to it.

This month Delivery World shipped fireworks from Milano to Moscow. Zelenogradsk (Kalningrad Oblast, Russia) will host world fireworks championship in September 2016. No doubt it will become one of the most breathtaking and beautiful events of this year. 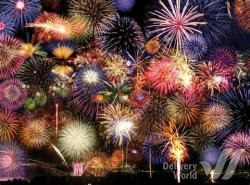