Registration
Home » About Us » News » AirBridgeCargo: Temporary Embargo on Transportation of Selective Goods During World Cup 2018 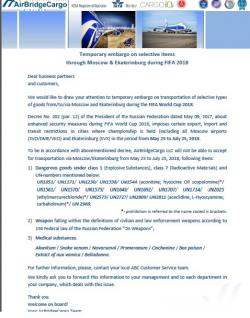 AirBridgeCargo notified its partners on temporal embargo on transportation of selective types of goods from/to/via Moscow and Ekaterinburg during the FIFA World Cup 2018.

The Decree No. 202 (par. 12) of the President of the Russian Federation dated May 09, 2017, about enhanced security measures during FIFA World Cup 2018, imposes certain export, import and transit restrictions in cities where championship is held (including all Moscow airports (SVO/DME/VKO) and Ekaterinburg (SVX) from May 25 to July 25, 2018.

To comply with the above Decree, AirBridgeCargo LLC will not be able to accept for transportation via Moscow/Ekaterinburg from May 25 to July 25, 2018, following items:

2) Weapon falling within the definitions of civilian and law enforcement weapons according to 150 Federal law of the Russian Federation “On Weapons”;