Registration
Home » About Us » News » Haute-couture in car tuning: delivery of BMW X5 Hamann from UAE to Russia

Haute-couture in car tuning: delivery of BMW X5 Hamann from UAE to Russia 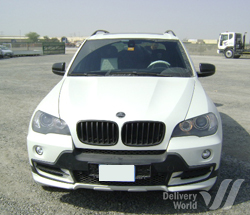 At the beginning of the summer’12, we received a order for delivery of auto in exclusive car tuning of German tuning studio Hamann Motorsport GMBh. White BMW X5 with forced speed characteristics and modified interior which was transformed by Hamann Motorsport from an ordinary soft-roader to a powerful sport car, was transported from UAE (Dubai) to Russia. As usual, when delivering an exclusive auto logistic staff of Delivery World provided the strongest control at the stages of driving to the port of departure, ground handling and loading. The vehicle arrived to the port of destination on time and safely.

We can remind you, that Hamann Motorsport studio was founded in1986 by German autoracer Richard Hamann, who participated in Special Touring Car Trophy, DTM championship, Formula-3 and other racing many times. Hamann 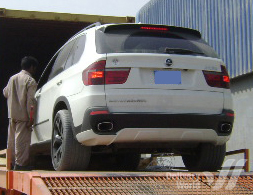 Our company on a regular basis provides delivery of exclusive cars and the Hamann autos are among them. We have already informed you about delivery of the most expensive street-legal car Bugatti Veyron; of one of the best and most expensive sedan in the world - Rolls Royce Phantom, and also about race cars Ferrari Fiorano, Ferrari Enzo and Ferrari California. We were also requested to manage freight forwarding of Nissan Patrol from UAE to Tokyo tuning studio and exhibition version of Invader L60 to Geneva Motorshow.