Registration
Home » About Us » News » Flight of Safety: Automobile Airbags from USA 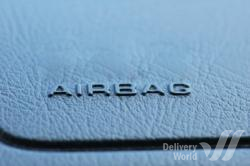 John W. Hetrick in US and Walter Linderer in Germany were the first to apply for patent on the airbags in the same time in 1951. Both inventions were based on compressed air utilization. Yet, further studies revealed that the devices were rather slow, and could not ensure maximum safety, and its utilization was recognized as useless.

Impulse cartridge emitting strong gas flow for nearly immediate inflation of airbag turned to be the best solution. The airbag widely used today by automobile producers was patented in 1963 by the Japanese inventor Yasuzoburo Kobori.

It is notable, that such airbag had no air all, it contained only products of burning, that were not just toxic, but hazardous to health, nevertheless it was called “airbag” everywhere while the word “cushion” introduced by John Hetrick was never used even in the English-speaking countries.

It took nearly 10 years for airbag to reach automobile. To test it, Ford installed airbags on Ford Taunus 20M P7b, and the first mass produced car with this device on board was 1973 line Oldsmobile Tornado.

In the end of October Delivery World shipped lot of automobile airbags from USA o Moscow. Our regular customer is completing customs processing of the cargo, and soon the airbags delivered by our company will be available for sale in the best service centers and automobile showrooms of the Russian capital.