Registration
Home » About Us » News » Music Flight: Accessories for Music Instruments from USA 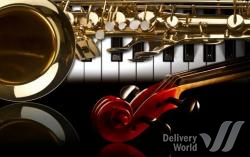 Sea shells were the first instruments, the first music was the sound that appeared when first humans clapped sea shells with each other.

And those alike modern music instruments were made from animal bones; man made whole inside to blow air. Percussion instruments were largely used as well (batlet, rachet, rattle made of dried fruits with bones or with small stones inside, drum).

Appearance of drum evidenced that people came to know of resonating properties of empty items. They started using dried leather, pulling it over hollow vessel. Wind group of instruments were used to create sound using air blow. They were made of reed, cane or even shells, and later of wood and metal.

During the past hundred years designation of music instruments has changed. It is even used to create music. Today modern music instruments are classified by setup, sound and particulars of sound generation and by many other criteria.

In the beginning of May Delivery World shipped lot of accessories for music instruments from Los Angeles to Moscow. The customer is completing customs proceedings, and who knows, maybe your next guitar strings will be those that were shipped across the ocean by our company.